END_OF_DOCUMENT_TOKEN_TO_BE_REPLACED

Tax day is quickly approaching. Are you ready?
END_OF_DOCUMENT_TOKEN_TO_BE_REPLACED
All Posts

It is not unheard of for tax disputes to stretch longer than a decade, especially when millions are at stake. It looks like this may be the case for Gene Bicknell and the state of Kansas.

The saga of the tax dispute between Bicknell, the man who made millions from Pizza Hut franchises, and the Kansas Department of Revenue continues with the recent decision from the Kansas Court of Appeals. 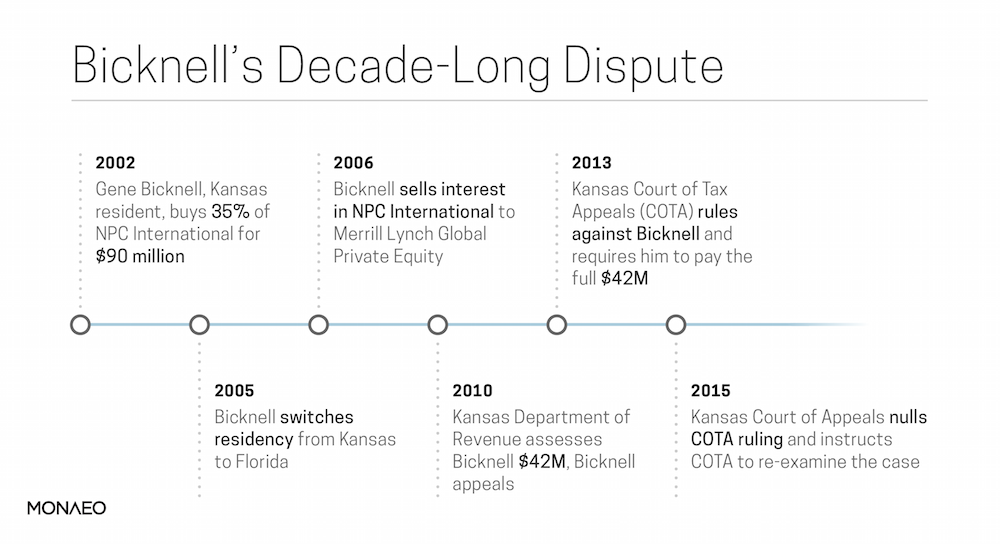 The value concerned isn’t negligible: $42 million paid by Bicknell to Kansas in 2013. If Kansas has to return the money, it could push the state budget into the red, says the Associated Press. Whether Kansas gets to keep the $42 million boils down to whether Bicknell was a resident of Kansas or Florida during 2005 and 2006.

In 2005, Bicknell changed his residency from Kansas to Florida. The following year he sold his interest in NPC International to Merrill Lynch Global Private Equity. At the time of the sale NPC International was the largest Pizza Hut franchisee in the United States. As a resident of Florida, which doesn’t have a state income tax, Bicknell sidestepped the expensive state taxes that would have resulted from selling his stake in NPC International.

As Bloomberg BNA’s Genie Nguyen has pointed out, moving to a state with no state income tax is a well-known strategy for avoiding state income taxes. However, establishing residency in a new state isn’t always that simple. In most states, including Kansas, residency is determined by an individual’s domicile. An individual can only have one domicile and where it is depends on a wide variety of factors including, but not limited to, physical presence.

Part of the legal tangle is due to the changes made after 2005 regarding how the Kansas Department of Revenue defined domicile. In 2005, as Peter J. Reilly highlights in Forbes, the DOR’s brief regulation on domicile implies that it is simply a matter of the location of an individual’s driver’s license, voter registration, and vehicle registration.

New regulations after 2005 added on a slew of other factors to consider, including:

In 2010, the Kansas Department of Revenue used the updated regulations to assess Bicknell with more than $42 million from the sale of his interest in NPC International in 2006. Bicknell’s roots in Kansas went deep (he was even a former candidate for governor) and consideration of the new criteria might well have questioned his Florida residency. Bicknell appealed, but three years later the Kansas Court of Tax Appeals (COTA) ruled in favor of the Department of Revenue.

Bicknell paid the $42 million but appealed once again, arguing that COTA disregarded several of the Department of Revenue’s regulations regarding residency status, as well as that those standards were “unconstitutionally vague.” This time, Bicknell may have a more favorable result. In September of 2015, the Kansas Court of Appeals vacated the previous COTA ruling. COTA will now have to reconsider the case.

The Court of Appeals declined to address Bicknell’s constitutional appeal. Whether or not the vague nature of Kansas Department of Revenue’s standards for residency is unconstitutional, it is undeniable that the lack of clarity leads to confusion and expensive court costs. Residency standards vary from state to state and are constantly changing. As Bicknell’s example shows, being caught on the wrong side of those changes can be a costly mistake.

Tax day is quickly approaching. Are you ready?
END_OF_DOCUMENT_TOKEN_TO_BE_REPLACED

This article originally appeared in Digiday.  If you thought 2020 was a messed-up tax year because of COV...
END_OF_DOCUMENT_TOKEN_TO_BE_REPLACED

This article originally appeared in Bloomberg Tax.  Just because you think you moved from New York doesn’...
END_OF_DOCUMENT_TOKEN_TO_BE_REPLACED